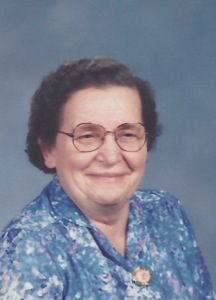 A celebration of life for Arlene Snyder, 86 of Kalona will be held Monday, January 28, 2013 at 10:00 AM at the First Mennonite Church in Iowa City. Burial will be in the Sharon Hill Cemetery in Kalona, following a luncheon at the church. Visitation will be held Sunday, January 27 from 2-4 and 5-7 PM at the Peterseim Funeral Home in Kalona. A memorial fund has been established for the First Mennonite Church and Pleasantview Home. Arlene Snyder died Friday, January 25, 2013 at Mercy Hospital in Iowa City following a period of declining health.

Arlene Snyder was born July 25, 1926 in Wellman, Iowa the daughter of Erlis and Martha Ida (Marner) Brenneman. She was united in marriage to John Snyder on November 2, 1942 at the West Union Mennonite Church and the couple celebrated 60 years of marriage last November. She worked as a housekeeper at Mercy Hospital and Oaknoll in Iowa City. Arlene was a 60 year member of the First Mennonite Church of Iowa City where she enjoyed the church sewing group and taught Sunday school for many years. Arlene looked forward to family gatherings and especially spending time with her grandchildren.

To order memorial trees or send flowers to the family in memory of Arlene Snyder, please visit our flower store.