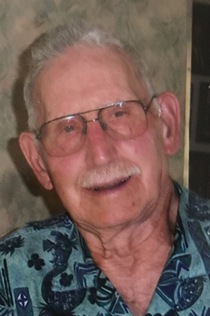 Dale was born November 18, 1927 in Henry County, the son of Lawrence and Anna (Wagler) Fritz.  Dale's family moved to Washington in 1935.  As a child he sold newspapers and magazines, and mowed lawns.  He attended Washington High School through 10th grade, when he went to work for Milwaukee Railroad.  He joined the army in 1951, and received a hardship discharge in 1952 following his father's death.  He was employed by Cargill Inc. from 1956-1974, also owned and operated Fritz Sanitation from 1974-1980.  Dale worked for Nisly Sawmill near Kalona, from 1980-1987.

He was united in marriage to Nina Lavely in 1955.  Nina passed in November 1956 after the birth of twin daughters.  Dale later married Bonnie Jean (West) Adams on May 31, 1968, in Washington.

Dale and Bonnie moved to Maui, Hawaii on October 28, 1987 where they lived unitl July 31, 2001.  He worked for Haiku Landscape Corp., and Island Plant Co., and also worked independently in landscaping maintenance.  After returning to Kalona in 2001 Dale volunteered in the grounds department for 10 years at Shiloh Church where he and his wife are members.

Preceding Dale in death were his parents, first wife Nina, brother Clifford, sisters Lucille Fritz and Darlene Gaines, and one spiritual granddaughter Amber Arita.
Peterseim Funeral Home of Kalona is assisting the family with arrangements.
To order memorial trees or send flowers to the family in memory of Dale Fritz, please visit our flower store.