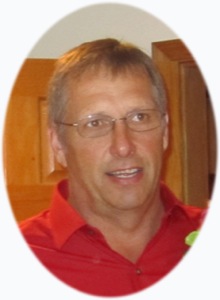 A celebration of life for Delwyn (Del) L. Hershberger 54, of Kalona will be held Monday, March 19, 2012 at 10:30AM at the Kalona Mennonite Church with Pastor Scott Swartzendruber officiating.  Burial will follow in the Fairview Mennonite Cemetery in rural Kalona.  Visitation will be held Sunday, March 18 from 2-8PM at the Kalona Mennonite Church.  A general memorial fund has been established.  Del Hershberger died Wednesday, March 14, 2012 at the University of Iowa Hospitals and Clinics following a short illness.

Del was born November 9, 1957 in Washington, Iowa the son of John and Alma (Miller) Hershberger.  He graduated from Mid-Prairie High School in 1976.  On September 20, 1986 he was united in marriage to Jane Yoder at the Kalona Mennonite Church.  He worked in several different jobs, most recently owning and operating the Hershberger Oil Company.  Del was a member of the Kalona Mennonite Church and previously had been a member of the Washington Township Optimist Club. He enjoyed hunting, watching basketball and NASCAR, helping coach his children's sports teams, attending their events, spending time outdoors grooming his lawn and spending time with his family.

Preceding Del in death was his father, John Hershberger in April of 2010
To order memorial trees or send flowers to the family in memory of Delwyn Hershberger, please visit our flower store.