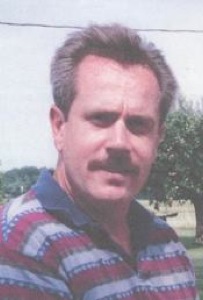 
Douglas Duane Farrier, 55, of Mesa, Arizona died at his residence on Friday, December 14, 2012 of a lingering illness. A short memorial service will be held Saturday, December 29, 2012 at 12:00PM at the Beatty Funeral Home in Washington with Pastor Rick Zickefoose officiating. Visitation will be held from 10AM until noon at the Beatty Funeral Home. Burial will follow the service at the Brighton Hillcrest Cemetery in Brighton. In lieu of flowers memorial may be made to the Brighton United Church of Brighton, Iowa.

He was born April 9, 1957 in Washington County Hospital to Kenneth D. and Patricia (Coakley) Farrier. He was a graduate of Washington High School, class of 1975. Douglas was an all conference selection in football and was a leading scorer in track his junior year. He attended Iowa Central College in Ft. Dodge. Douglas was a resident of Mesa, Arizona for 25 years and he enjoyed flea markets and sports.

He was preceded in death by his mother, Patricia Farrier on September 7, 1960, longtime friend, Judy Viani, and his dog, Lucy.

To order memorial trees or send flowers to the family in memory of Douglas Farrier, please visit our flower store.