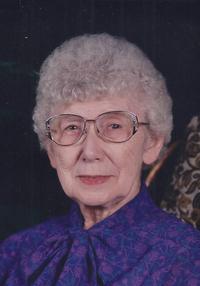 A celebration of life for Edna M. Teets, 97, of Kalona will be held Saturday, June 22, 2013 at 11:00 AM at the United Christian and Baptist Church in Kalona with Pastor Tim Stewart and Pastor Tammy Buseman officiating.  Burial will follow at the Sharon Hill Cemetery in Kalona. Visitation will be held Friday, June 21 from 6-8 PM at the Peterseim Funeral Home in Kalona and from 10 – 11 AM at the church on Saturday.  A memorial fund has been established for Iowa City Hospice or the United Christian and Baptist Church.  Edna M. Teets died Tuesday, June 18, 2013 at Mercy Hospital Inpatient Hospice in Iowa City following declining health.

Edna Maude (Hochstetler) Teets was born July 1, 1915 in Johnson County, the daughter of Emanuel B. and Mary (Zook) Hochstetler.  She attended rural schools.  On March 11, 1952 Edna was united in marriage to Gerald E. Teets in Fairfield, Iowa and the couple resided in Kalona.  Before their marriage she worked at the Maplecrest Turkey Plant and following his death she worked at the Pleasantview Home.  Edna was a member of the United Christian and Baptist Church where she was active in Christian Women's Fellowship.  She enjoyed people of all ages and was known for her cooking, quilting, gardening and baking; especially her cinnamon rolls, cookies and pies.

She is survived by four generations of nieces and nephews.  Edna recieved special care in her later years from great nephews Dan and wife Janet Teets and family and Jerry and wife Linda Teets and family.