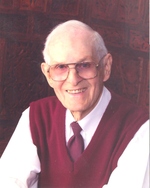 Funeral Services have been set for 10:00 AM Monday, March 11, 2013 at the West Chester United Methodist Church with Pastor Marlene Janssen officiating. Burial will follow at the West Chester Cemetery. Visitation will begin at noon on Sunday at the Beatty Funeral Home in Washington with family present from 2:00-4:00 P.M. A memorial in the name of Edward J. Hough has been established for the West Chester First Responders.

Edward was born December 14, 1914 in rural West Chester, IA the son of Arthur Leandor and Myrtle Maude (Jayne) Hough. He graduated from West Chester High School in 1933 where he participated in track and football.He was united in marriage to Velma Grace “Susie” Stumbaugh on February 15, 1941 in Des Moines, IA.

He moved to California in 1943 and lived there for 49 years, returning to his roots in Iowa in 1992. While in California he attended classes at the University of Southern California and was Chief Financial Officer for Rain Jet Corp. in Burbank, CA and later Hardie Irrigation in Laguna Niguel, CA.

He enjoyed reading, gardening and anything to do with numbers. He was like a human calculator. He loved the Lord and his purpose in life was doing for others. He was a member of the West Chester Methodist Church.

He was preceded in death by his parents, wife Susie in 1995, brothers, Earl “Buzz”, Clarence “Abe” and Ray “Pug”; sisters Mildred Eyestone and Beatrice Niffenegger.

To order memorial trees or send flowers to the family in memory of Edward Hough, please visit our flower store.