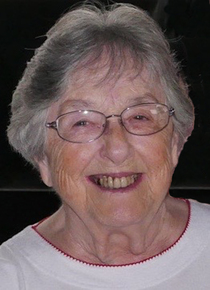 
A celebration of life for Esther Hershberger, 92, of Kalona will be held Saturday, March 12, 2016 at 3:00 p.m. at the Sharon Center United Methodist Church in rural Iowa City, with Pastor Erling Shultz officiating.  Burial will follow at the East Union Cemetery.  Visitation will be held one hour prior to the service, from 2 – 3 p.m. at the church.  A memorial fund for the Sharon Center United Methodist Church and the Pleasantview Home has been established.  Esther Hershberger died Monday, March 7, 2016 at Mercy Hospital in Iowa City.

Esther (Sevits) Hershberger was born October 23, 1923 in Fort Wayne, Indiana, the daughter of Victor and Barbara (Beller) Sevits.  She graduated from Goshen College with an Associates of the Arts and later from LaJunta College in LaJunta, Colorado with a nurses degree.  On July 9, 1949 she was united in marriage to Leo Hershberger in Fort Wayne, Indiana. After 39 years of marriage he died in 1988.  Esther worked as a nurse at the University Hospital, the Pleasantview Home and Parkview Manor in Wellman.  On July 14, 2001 she was united in marriage to Walter Hershberger in Kalona.  Esther was a member of the Sharon Center United Methodist Church where she belonged to the United Methodist Women's group.  She enjoyed working with plastic canvas and her dog Duke.  Esther loved music and sang in the church choir and played the piano until recently.  Most important to Esther was her family and she was happiest when they were all together.

Preceding Esther in death were her parents, her husband Leo, one son Alan Mark Hershberger, four sisters and two brothers, and her husband Walter Hershberger.

To order memorial trees or send flowers to the family in memory of Esther Hershberger, please visit our flower store.