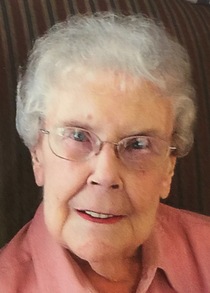 Services have been set for 11:00 AM Monday, March 20, 2017 at the Washington United Methodist Church with Pastor Ben Blanchard officiating. Burial will follow in the Elm Grove Cemetery, Vistitation will be 2 hours proir to the service at the church. Beatty Funeral Home is assisting with arrangements.  A memorial in the name of Helen M. Turnipseed has been established to the United Presbyterian Health Center.

Helen was born June 30, 1927 in  Washington, Iowa the daughter of AG and Dorothy Imogene (Van Dyke) Swanson. She graduated from West Chester High School in 1945 and was united in marriage to Marion Turnipseed on August 14, 1949 at the Washington United Methodist Church.

She was a member of the Washington United Methodist Church. She was employed with the Washington County Auditor, Liberty Mutual Insurance Co. and retired from Merideth Corporation Sucessfull Farming Magazine in Des Moines. She enjoyed painting, shopping, bowling and was a silver medalist in the 1990 Senior Games.

Suvivors include her husband Marion of Washington; son David of Des Moines, 3 grandchildren and 3 great-grandchildren.

She was preceded in death by her parents and daughter Rhonda Van Horne in 2005.


To order memorial trees or send flowers to the family in memory of Helen Turnipseed, please visit our flower store.