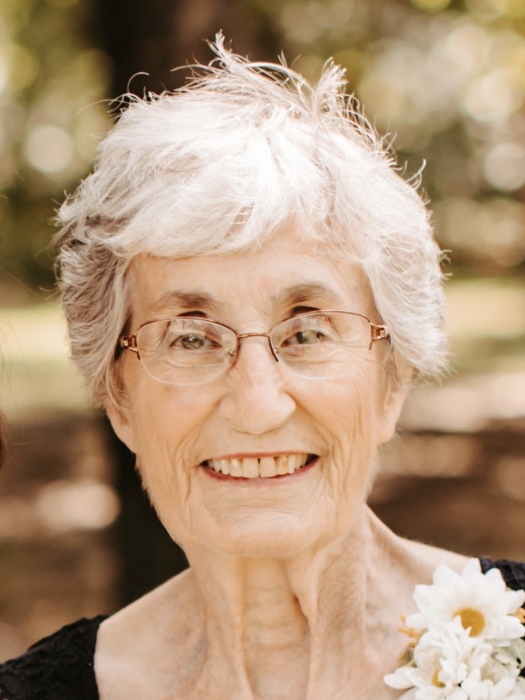 Funeral Services for Loretta J. Kauffman, 81, of Grant, Nebraska, formerly of Kalona, will be held on Saturday, October 23, 2021, at 10:30 a.m. at East Union Mennonite Church. The service will be available via Livestream at the Beatty Peterseim Facebook Page. Burial will follow at the East Union Cemetery. The family will greet friends on Friday, October 22, 2021, from 4 – 7 PM at the Peterseim Funeral Home in Kalona. Memorials are suggested to Pleasantview Home and Hillcrest Academy. Loretta Joan (Miller) Kauffman passed away at Perkins County Hospital in Grant, Nebraska on October 15, 2021.

Loretta was born on February 23, 1940, to Sam T. and Mary Miller in Kalona, Iowa. She attended Prairie Dale School, Kalona Elementary, and Hillcrest Academy (formerly known as Iowa Mennonite School). After graduating from IMS, she chose to be a secretary at Home Gas Company in Wellman for six years. She was united in marriage to John J. Kauffman of Iowa City on March 28, 1964. She then became a farmer’s wife and continued to do bookkeeping for the farm until 2020. Loretta enjoyed volunteering at the MCC Crowded Closet in Iowa City. She was a sales associate at Olive Branch Bookstore for 10 years, assisting many customers. She worked at Steindler Orthopedic for nine years. Her retirement in 2008 allowed her to care for John in their home following his stroke in March 2009.

Loretta was baptized and became a member of East Union Mennonite Church at the age of 12. She was an active member and spent many hours teaching Sunday School, Vacation Bible School, and serving on various committees. She enjoyed demonstrating her Christian faith in serving and working with people. Loretta had fond memories of attending Handel’s Messiah, and later participated in community performances over the years. She volunteered for many activities at Hills Elementary and IMS, where her children attended. Loretta’s hobbies included reading, putting hundreds of puzzles together, gardening, shopping for treasures at flea markets and thrift stores, needlework, music, traveling, camping, hosting MCC international trainees, entertaining, and cooking for large groups.

In June 2020, Loretta made the move from Iowa City, Iowa to Grant, Nebraska to be closer to family. Loretta’s faith never wavered as she looked forward to worshipping her Lord and Savior while being reunited with John. Psalm 23 brought special comfort during the long days in her battle with cancer.

Loretta was preceded in death by her parents, her husband, and one sister, Arvilla (Miller) Flisher.

To order memorial trees or send flowers to the family in memory of Loretta Kauffman, please visit our flower store.