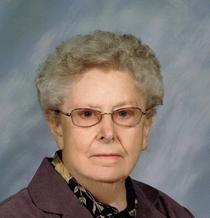 Louise A. Brenneman, 92, of Kalona passed away Saturday, October 25, 2014 at the University of Iowa Hospital and Clinics after a sudden illness. A funeral service will be held Thursday, October 30, 2014 at East Union Mennonite Church at 11:00 AM with a time of visitation on Wednesday, October 29, 2014 from 4 – 7 PM at Peterseim Funeral Home. A memorial fund has been established for Iowa Mennonite School.
Louise was born on October 1, 1922 in Shickley, Nebraska to A. E. and Emily (Beller) Miller. In 1936 the family moved to Iowa where Louise graduated from Kalona High School. She then worked at Reifs Department Store for eight years. In 1947 she married Floyd Brenneman and was his full-fledged farm partner—driving the tractor, putting up hay in the barn and carrying feed to the livestock. Louise was a hard worker and known by family and friends for her sense of humor and quick wit. She was a member of East Union Mennonite Church.
Surviving are her two children, Kathy Walter of Tipton and Kristen (Michael) Brenneman of Kalona; four grandchildren, Andrea Walter (Eric Grueschow) of Texas, Jason (Kim) Walter of Tipton, Gretchen (Vince) Yoder of Kalona, and Allison (Isaiah) Goertz; and seven great-grandchildren, Cooper Walter Grueschow, Kayla, Mack, Alicia, and Jenae Walter, and Marie and Troy Yoder to whom she was devoted and it was apparent that they loved her back. She is also survived by her brother Don Miller of Kalona.
Louise was preceded in death by her husband, parents, brothers Austin and Harold, and sister Dorothy Mishler.
To order memorial trees or send flowers to the family in memory of Louise Brenneman, please visit our flower store.