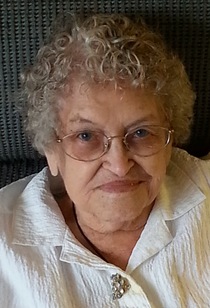 A memorial service for M. Maxine Miller, 94, of Kalona, will be held Monday, January 4, 2016 at 11:00 a.m. at the United Christian and Baptist Church in Kalona with Pastor Dennis Arnold officiating.  Private family burial will be held prior to the service.  Visitation will be held Sunday, January 3, 2016 from 3 – 6 p.m. at the Peterseim Funeral Home in Kalona.  A memorial fund has been established for the Kalona Historical Society and the United Christian and Baptist Church.  Maxine Miller died Wednesday, December 30, 2015 at her home in Kalona.

M. Maxine Miller was born April 6, 1921, in Inman, Kansas, the daughter of Amos and Cora(Zimmerman).  She graduated from high school in Hesston, KS and later in life from Mercy School of Nursing.  She married J. Claude Miller on June 16, 1940 at the Daytonville Mennonite Church.  Maxine and her husband farmed
west of Wellman, where they raised their six children.  After many years of farming she realized her dream vocation as a registered nurse.  Maxine worked as a nurse at Mercy Hospital and then served as the Director of Nursing at Pleasantview Home.  After retirement Maxine and Claude managed the Kalona Golf Club.  Maxine also worked as a tour guide for the Kalona Historical Society.  She was a member of the United Christian and Baptist Church and the Idris Club of Kalona.  She enjoyed sewing, quilting, playing golf and spending time with her family.  Maxine was an avid Hawkeye and St. Louis Cardinal fan.

To order memorial trees or send flowers to the family in memory of M. Miller, please visit our flower store.