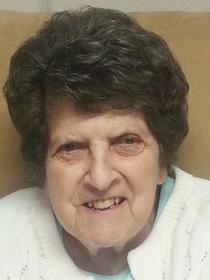 A celebration of life for Marion E. Nelson, 87, of Kalona, formerly of Davenport, will be held January 3, 2016 3:00 p.m. at the Kingdom Hall Of Jehovah's Witnesses, 3801 Hillandale Davenport, Ia.  Marion Nelson died Wednesday, December 16, 2015, surrounded by family at Windmill Manor in Coralville.

Marion Elaine (Marolf) Nelson was born December 26, 1927 in Muscatine, Iowa, the daughter of Harry and Vera (Lanker) Marolf.  She graduated from Wilton High School and St. Luke's School of Nursing in Davenport.  She was employed as an LPN and worked at several nursing homes in the Davenport area.  Marion was united in marriage to Raymond Nelson in 1947 in Davenport. She was  a member of the Kingdom Hall of Jehovah's Witnesses in Washington, Iowa.

Preceding Marion in death were her parents, her husband Raymond in 1999, one son, Dennis Nelson, one brother, Ron Marolf and a grandson, Jason Shook.
To order memorial trees or send flowers to the family in memory of Marion Nelson, please visit our flower store.