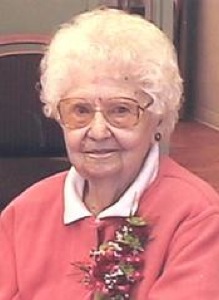 
Funeral Services have been set for 10:00 AM Thursday, August 23, 2012 at the Beatty Funeral Home Chapel, with Pastor Jim Stiles of the United Methodist Church officiating. A brief graveside service will follow at the Elm Grove Cemetery. Visitation will be Wednesday, August 22nd from NOON until 5 PM, and from 9 -10 AM August 23rd at the Beatty Funeral Home. A general memorial has been established.


Maybelle was born June 22,1912 in Tyndal, South Dakota, the daughter of Rudolf and Anna Cejka Malik. She attended grade school in Nebraska and was a graduate of Ware High School in Ware, Iowa. She lived with her sister, Evelyn Woodin while attending high school. She was united in marriage to Gerald E. Edwards on May 17, 1934 in Washington, Iowa.


Maybelle worked for Sears in Washington for eight years as the credit manager and nine years as manager. She also worked at KCII Radio for seven years as a scheduling manager.
Maybelle was active in many community organizations. She was a charter member with a 50 year pin and 1980 Woman of the Year for Business and Professional Women. In the Rebecca Lodge since 1951, she held all the executive officer positions over the years. She was a 15 year member of the Washington County Cancer Board and co-chairperson of the Washington County Easter Seals. For 6 years she was president of the Y Senior Citizen Board. She was also a charter member of the Washington County Hospital Auxiliary.
She had many varied interests. At the Senior Citizens’ Center at the Y she was a frequent card player with membership also in the St. James Pinochle Card Club. Her specialty was reviving plants both indoor and outdoor to a flourishing condition. Cooking delicious meals, family gatherings and travel, pets, sewing, and reading were also hobby choices. Time to talk with her family or friends was a priority either on the phone or in person.


Survivors include two grandsons, Mark Hermann of the St. Louis area, and Scott Herrmann and his daughter, Jessica Herrmann as well as one nephew, Willis Kovar of Colorado Springs, CO.
She was preceded in death by her parents, husband Gerald in 1983, daughter Lavonne Herrmann in 1999 and her son-in-law, Carl Herrmann in 2011, and her siblings, 2 brothers and 3 sisters. With just a few exceptions, Maybelle was the last of her family.


Friends became her support system in Washington, especially. She will be remembered fondly.

To order memorial trees or send flowers to the family in memory of Maybelle Edwards, please visit our flower store.