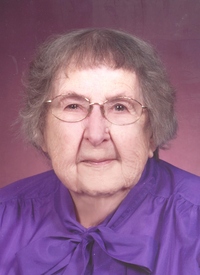 Nima McClelland, 96, of Washington, was granted her wish and passed from this earth on Friday, November 8 at the McCreedy Home in Washington.  Her party (celebration of life services) will be held Thursday, November 14, 2013 at 10:30 AM at the Faith Baptist Church in Washington with Pastor Harald Gruber officiating.  Burial will follow at the Hillcrest Cemetery in Brighton.  Visitation will be held Wednesday, November 13 from noon – 7 PM at the Beatty Funeral Home in Washington, where the family will greet friends from 4 – 7 PM.  A memorial fund has been established for Iowa City Hospice and the Faith Baptist Youth Group.

Nima Violet Wilson was born August 12, 1917 in Young America, rural Washington County, Iowa the daughter of Wade Carson and Oma Bell (Wilson ) Wilson.  She attended Pilotburg Rural School near Wellman.  She was united in marriage to Frank Keith McClelland on November 12, 1936 at the Westminister Presbyterian Church in Decatur, Illinois.  They were blessed with four children: Beverly Ann, Wade Lee, Janice Arline and Joyce Eileen. Nima was the oldest living member of the Faith Baptist Church in Washington where she was baptized and became a member on April 24, 1977.  She worked at the Washington County Hospital for 15 years as a housekeeper but most importantly was a homemaker who enjoyed taking care of her family and friends.  Nima enjoyed cooking and baking for others, sewing, needlepoint, and quilting, playing cards and reading in her later years, but most importantly she treasured her granddaughters and great grandchildren.  She was well known for her homemade egg noodles, cinnamon rolls, kolaches, daffodil cakes, fried chicken, and famous for her variety of homemade Christmas candy that she so enjoyed making for others.