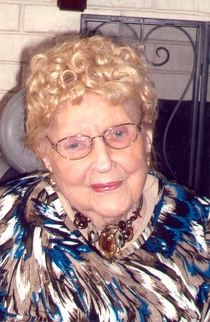 Norma “June” Allen, 91, passed away Friday morning, March 13, 2015, in the home of her daughter, with all of her children present. A memorial mass was held at St. Mary’s Catholic Church, Guthrie, Oklahoma Tuesday, March 17.  In lieu of flowers, the family requests that donations be made to the “Time Out for Senior Citizens” program at St. John the Baptist Church at 9th and Littler, Edmond, OK 73034.
Norma June TeBockhorst was born June 17, 1923 in rural Washington County, Iowa, to Leo and Mary Shalla TeBockhorst.  June attended Holy Trinity Catholic School and Kalona High School where she was drum majorette and valedictorian of her class.   After graduation, she attended business school in Davenport, Iowa.  When World War II broke out, she returned to Washington County, and worked at the Kalona, Iowa post office.  Following the war, she met and married Joe Allen of Kalona.  They went on to own a couple of businesses in Kalona, most notably the Super Valu Grocery Store.  June later went on to work in several departments at the VA Hospital in Iowa City.
Following retirement, Joe and June moved to Washington, Iowa.  After Joe’s death in 2000, June moved to Edmond, Oklahoma where she lived for 11 years at St. John’s Village, part of St. John the Baptist Catholic Church.  In 2012 she moved to Golden Age Nursing Facility in Guthrie where she has resided for the past three years.
She is survived by three children: JoAnn Allen of Wickenburg, Arizona, Judy Allen Walling of Edmond, Oklahoma and John Allen of Duedin, Florida; granddaughter: Samantha Siegert of Eden Prairie, Minnesota; brother: Robert TeBockhorst of Riverside; 12 nephews and one niece.
She is preceded in death by her parents; husband: Joe; sister: Bernadette Pribyl; brothers: Norbert and Richard TeBockhorst; son-in-law: Bill Walling, Jr.; and niece Tracy Allen.

To order memorial trees or send flowers to the family in memory of Norma Allen, please visit our flower store.