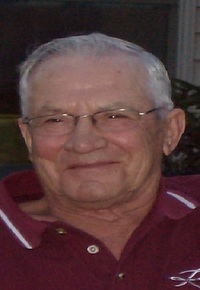 Paul was born August 12, 1933 in rural Washington County, near Riverside, the son of Richard and Blanche (Vouchek) Schnoebelen. He graduated from St. Mary's Catholic School in 1952 and joined the United States Army in 1953 and served until 1955. On April 7, 1956 he was united in marriage to Marjorie (Marj) Robertson at St. Mary's Catholic Church in Riverside. He was a steward of the land and enjoyed taking care of his livestock. Paul also sold DeKalb seed corn for 20 years. After retiring from farming, Paul worked part time for the River Products Company which was a wonderful place for him to be as he was able to operate the mower tractor, large end loaders and trucks.  He was much loved by all who worked with him.  He was known as the "full time part time guy".

Paul was a life member of the St. Mary's Catholic Church, member and past Commander of the Riverside VFW Post #6414, member of  the Lone Tree American Legion Post #457, and Iowa City Bowling Association. He enjoyed fishing, snowmobiling, bowling, golfing, playing cards, traveling and attending his children and grandchildren's activities, he was a very proud Dad and Grandpa.

To order memorial trees or send flowers to the family in memory of Paul Schnoebelen, please visit our flower store.