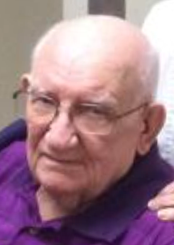 A celebration of life for Robert J. Ruth, 94, of Hills, will be held Saturday, January 7, 2017 at 11 AM at St. Joseph Catholic Church in Hills, IA., with Father Mike Spiekermeier officiating. Visitation will be held Friday, January 6 from 5 – 7 PM at the Peterseim Funeral Home in Kalona, where a Rosary will be recited at 4:30 PM.  The body has been cremated and burial will take place at a later date.  A memorial fund has been established for St. Joseph Catholic Church and the Hills First Responders.  Robert Ruth died Monday, December 26, 2016 at the Atrium Village in Hills.

Robert John Ruth was born November 25, 1922 in Riverside, Iowa, the son of Herman and Bertha (Bulger) Ruth.  He graduated from St. Mary's Catholic High School in Riverside, always proud that along with his nine brothers and sisters, the Ruth family graduated the largest number of children from one family.  He served in the United States Army and on July 25, 1946 he was united in marriage to Dorris Mae Gregor at the Immaculate Conception Catholic Church in Cedar Rapids, Iowa.  Robert worked in the production and shipping department at Quaker Oats in Cedar Rapids for many years.  During that time the couple lived in Shueyville, where Robert was a founding father, serving on the city council, and as mayor.  He was instrumental in getting the town of Shueyville incorporated.  Robert was also a member of the Swisher American Legion and was a Little League baseball coach.  He enjoyed following the Iowa Hawkeyes, especially football and basketball. The couple enjoyed their retirement years in the Rio Grande Valley in Texas; ten years as snowbirds and 14 years as permanent residents.