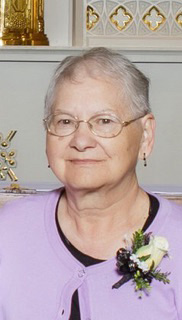 Beatty Peterseim Funeral Home 201 B Avenue, PO Box 81 Kalona, IA 52247-0081 319 656 2233 beattypeterseim@gmail.com peterseimfuneralhome.com A celebration of life for Ruby E. Miller, 82, of Kalona will be held Saturday, September 1, 2018 at 10AM at Kalona Mennonite Church. Burial will follow at East Union Cemetery in rural Kalona. Visitation will be held at Kalona Mennonite Church on Friday, August 31, from 3 – 7PM. In lieu of flowers a memorial fund has been established for Iowa City Hospice in memory of Ruby and in honor of Dr. Ann Broderick. Ruby E. Miller died Tuesday, August 28, 2018 at the Pleasantview Home in Kalona. The Peterseim Funeral Home is assisting the family.

Ruby Ellen (Lehman) Miller was born November 21, 1935 in Centerville, Michigan, the daughter of Amos J. and Lizzie (Hostetler) Lehman. She was united in marriage to Manas Miller on November 7, 1957 in Shipshewana, Indiana. Ruby worked as a waitress for 40 years, including owning and operating the Wayside Inn in the late 1970's. She also made pizza at Casey's in Kalona for ten years. Ruby was a member of Kalona Mennonite Church, where she was active in WMSC and made coffee for fellowship time after worship. She enjoyed family get-togethers, baking pies, cooking, crocheting, embroidery and having coffee with her friends

Preceding Ruby in death were her parents, her husband Manas in 1983 and a brother Wilbur Lehman.

To order memorial trees or send flowers to the family in memory of Ruby Miller, please visit our flower store.