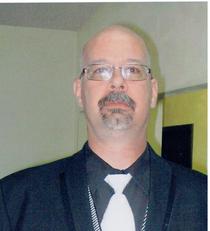 Stephen Michael Conwell, 49, of Kalona passed away Friday, June 13, at his home in Kalona.  Memorial celebration of life services will be held at 11:00 AM, Wednesday, June 18, 2014 at St. Thomas More Catholic Church, Coralville.  Fr. Steven Witt will officiate.
A private family burial will be held at a later date in the Sharon Hill Cemetery, Kalona.
Visitation will be Tuesday, June 17, from 4-7 at the Peterseim Funeral Home, 201 B Ave., Kalona.  A prayer service will be at 7:00 PM.  A memorial has been established in his memory for the Kalona Food Pantry.

Stephen was born September 3, 1964, in Fort Knox, Kentucky, the son of Dr. David J. and Mary Jane (Hamer) Conwell.  Stephen graduated from Mid-Prairie High School in 1982.  He earned an A.A.S. degree in Dental Lab Technology from Kirkwood College in 1984, and an A.A.S. degree in Electronics Engineering Technology from Kirkwood College in 2004.
Stephen was employed at the Kalona Dental Association for 20 years and at Rockwell Collins in Cedar Rapids for 10 years.  He was a member and past President of the Iowa City Aerohawks club.  He had delivered Meals on Wheels in Iowa City.

He was preceded in death by his grandfathers and grandmother.
To order memorial trees or send flowers to the family in memory of Stephen Conwell, please visit our flower store.