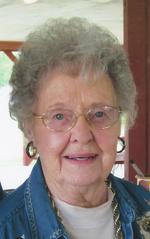 Vyrle Grout, 91 of rural Riverside died Thursday, March 7, 2013 at the Pleasantview Home following a series of strokes. The body has been cremated and at Vyrle's request there will be no services. A memorial fund for the South Sharon (Grout) Cemetery and Hospice of Washington County has been established. Memorials may be sent to the Peterseim Funeral Home, Kalona

Vyrle Lorraine (Moomey) Grout was born November 4, 1921 in Frytown, Iowa the daughter of Cullen and Amber (Morgan) Moomey. She graduated from Kalona High School in 1940 and on August 29, 1940 she was united in marriage to Clair "Buck" Grout in Kahoka, Missouri. Vyrle worked at the Pleasantview Home in Kalona as a volunteer for 10 years and in the administrative offices as a secretary for five years. She volunteered at Atrium Village in Hills for seven years. Vyrle was a member of the Order of Eastern Star Jessamine Chapter in Sharon Center, and the Sharon Center United Methodist Church; where she served through the years as secretary, assistant Sunday school teacher, Bible school teacher, recording treasurer, children's opening service, administrative board and Council of Churches. She also belonged to the Kalona Historical Board, the 39er's Club, Sharon Card Club, Alpha Club and Town and Country. She was a leader for Camp Fire Girl's, Bluebird's and 4-H. Vyrle loved to entertain, have family dinners, play cards, spend time with friends, and play pranks on people. She was always helping others, and serving her community when there was a need.

To order memorial trees or send flowers to the family in memory of Vyrle Grout, please visit our flower store.