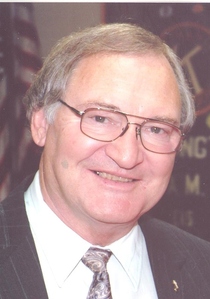 
Wendel Guy was born September 17, 1939 in Brighton, Iowa the son of L. P. "Hap" and Mabel (Engel) Guy.  He graduated from Brighton High School and later received an Associates Degree in sales from Kirkwood Community College.  He served in the United States Air Force from 1958 – 1963.  In 1964 he was united in marriage to Marla VaLeu, the couple later divorced and he was married to Lorraine (Spurgeon) Hughes in 1980.  Wendel was a farmer and later worked at Yoder Feeds in Kalona, sold silos for AO Smith Harvestor, sold cars in Washington and Mt. Pleasant, was a rural mail carrier for route 3 in Washington, and was a stained glass artist.  He was a member of the Immanuel Lutheran Church, Friends of Lake Darling, Washington American Legion Post #29; where he was instrumental in organizing the color guard, Brighton Masonic Lodge, Order of the Eastern Star, Order of the White Shrine and the Shriner's.  Wendel enjoyed collecting and riding Cushman Scooters, creating stained glass pieces, and spending time with his kids and grandkids.  He took pride in providing graveside services for veterans, and was always willing to share his faith and help others; including providing rides to appointments for countless folks.

To order memorial trees or send flowers to the family in memory of Wendel Guy, please visit our flower store.